The Riserva di Brunello di Montalcino Bramante is made only with exceptional vintages. This wine is bottled during the 5th year after harvest and left for refinement in the bottle until the February of the 6th year before being released on the market.

Spring that begins with heavy rains in March. April, on the other hand, was sunny and hot, while the month of May recorded more rain than the average that allowed the plant to accumulate important water reserves to cope with the summer.
The months of June, July and August were not very hot and with rains in some cases excessive.
The climate a little colder in recent years has delayed both the veraison (August 10) and the ripening of the grapes and it was necessary to reduce the load of grapes on the plants to encourage full maturation. Good start of October and the healthy grapes allowed to wait to harvest for a good ripening.

Intravino: San Lorenzo: Ruby intriguing and natural to the eye, with nuances also garnet. Then the nose recalls the raspberry and strawberry jam: in the kitchen, the light smoked fireplace, the wooden table, the leather of the bag. In the mouth it is warm and succulent, almost flesh with blood.
93

Wineblogroll: Sanlorenzo -Bramante Brunello di Montalcino Reserve 2013 – I decided to mention it because this reserve for me – which I’m notoriously a great lover of the reserves in the UK – has an added value given by its ability to capture me after a taste of great clarity like the Brunello 2014 of same Luciano Ciolfi. A nose that is evolving slowly, with a distinct and well-defined stroke. The sip is slender, strong, busy both in the dense and prospective tannin and in the length to say the least noticeable. One of the best wines produced by this reality since I know it.

Gardininotes: 94 BRUNELLO DI MONTALCINO RISERVA BRAMANTE 2013 With both toasted fruit and wooden tones at first, it includes pepper and
orange peel scents. Apparently, its mouthful is aggressive and sapid. But
then, magically, it expands on the palate with tannins, introducing width,
agreeableness and drinkability that do last until the very intense finish. 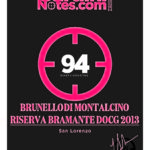